18 Feb 2020
From New York-based Harper’s Bazaar, the world’s first fashion magazine, to the latest pop works of Noémie Chaillet-Piquand, a surprising dialogue between Azzedine Alaïa and Balenciaga, and a Christian Louboutin retrospective, join us on our fashion tour of the Right Bank.

To mark the reopening of its newly renovated fashion galleries, the musée des Arts Décoratifs has organized a show exploring 150 years of the US fashion magazine Harper’s Bazaar, summed up through the vision of the talented and varied artists, photographers, creative directors and illustrators who invented this groundbreaking magazine. Launched in 1867, the magazine owed its early success to the vision of its first editor, Marie-Louise Booth, a Francophile suffragist, woman of letters and follower of fashion. In the 20th century, Picasso, Cocteau and Matisse were among the French artists to work for the magazine, along with figures from the American school – Pollock, Stella and Burroughs – as well as Colette, Simone de Beauvoir and Françoise Sagan. Photographers who revolutionized fashion, such as Richard Avedon, Peter Lindbergh, Hiro, Man Ray, Patrick Demarchelier and Jean-Paul Goude, also became mainstays. Some leading couturiers – Charles-Frederick Worth, Paul Poiret, Jeanne Lanvin, Madeleine Vionnet, Elsa Schiaparelli, Christian Dior and Cristóbal Balenciaga – even owed part of their legendary status to Bazaar’s prestige. The exhibition also pays tribute to major figures in Bazaar’s history, including Carmel Snow, Alexey Brodovitch, Diana Vreeland, Liz Tilberis, and its most recent editor Glenda Bailey. And, of course, the 1,500-sq.m exhibition includes 60 dreamy pieces to swoon over! Just a short trot from rue de Rivoli, under the arcades of the Palais-Royal, the Joyce Gallery is showcasing works by the amazing Noémie Chaillet-Piquand. The woman who invented the world’s first luxury sneakers and developed vibrato and dwich leathers at Hermès has finally branched out as an independent designer under the name Nochapiq. Exploring consumer society and everyday objects with a pop sensibility, she expresses her fascination for products and how we use them by recycling the objects and fabrics that pass through her hands. She takes poufs, benches or chairs and compulsively cuts and tailors artful swatches of material – survival blankets, Hermès scarves, clothes and elastic – along with Dior, Chanel and Gucci bolduc tap to “saddle cover” and wrap them in a savvy, unique and sometimes automatic way.

Fans of haute couture elegance will once again be heading to rue de la Verrerie in the Marais on the Right Bank this year where the Association Azzedine Alaïa is currently hosting a mind-blowing ‘conversation’ between Azzedine Alaïa and Cristóbal Balanciaga. This rare and magical interaction between two leading couturiers is the brainchild of Hubert de Givenchy and the result of a unique initiative by a young Tunisian designer who, in 1968, following the death of Cristóbal Balenciaga, rescued the Spanish couturier’s stock of fabrics and clothes at the request of the fashion house’s former director, Mademoiselle Renée. The two couturiers shared a love for seamless designs, a penchant for sumptuous blacks, and like true perfectionists, the same mindset and creative drive, unique and almost unimaginable in the history of fashion. This fashion tour ends in the 12th arrondissement with the first major exhibition devoted to shoe designer Christian Louboutin, a leading light on the Paris fashion scene. Daring and occasionally devilish, the man famous for his trademark red soles presents hundreds of his craziest and most elegant shoes alongside his sources of inspiration, from the Art Deco surroundings and aquarium of the musée de la Porte Dorée, where the exhibition is hosted, to artists including director and photographer David Lynch, choreographer Bianca Li and Pakistani visual artist Imran Qureshi. 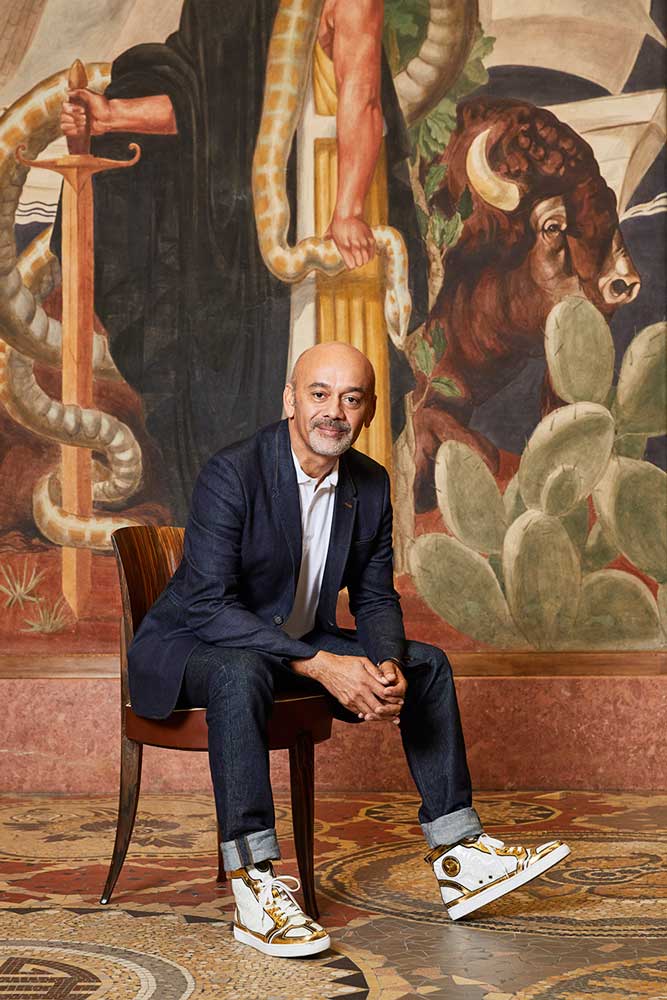