All aboard the Hôtel de la Marine

20 Aug 2021
Moored on Place de la Concorde, a jewel of 18th-century Parisian architecture, the Hôtel de la Marine, restored by the Centre des Monuments Nationaux, invites you to discover its sumptuous décors adorned with outstanding pieces of furniture and works of art. A visit to the Hôtel de la Marine is set to become a must for anyone staying in or passing through the capital.

Between the Tuileries Garden and the Champs-Élysées, there was once a vast esplanade simply begging to be turned into a large square – which is exactly what Louis XV decided to do. Two palaces were built on one side of the square, looking towards the Seine. One is now home to the Hôtel de Crillon and the headquarters of the Automobile Club de France; the other, the Hôtel de la Marine, served as the headquarters of the French naval ministry from 1789 to 2015. Before becoming a ministry, this stunning neo-classical building was used as the royal Garde-Meuble – a grand furniture storehouse and workshop – and the restoration mostly reflects this earlier period. The most obvious additions are to be found in the Cour de l’Intendant, the reception area, with its pyramidal glass roof and carpet of LED light beams. The second-floor state rooms, which feature their 19th-century décors, were once the public exhibition rooms of the Garde-Meuble, and it was from here that the French crown jewels were stolen in 1792! After visiting the loggia and taking in the unforgettable view over the Place de la Concorde, the tour continues through the 18th-century apartments occupied by the intendants entrusted with furniture and artworks from the royal residences.

As you move from room to room, the “Confident” connected headset transports you back to a world of voices and ambient noises. The furniture and objects on display, which are either original or date from the same period, mostly come from the stores of other large and small public buildings. Thanks to the extremely detailed inventories made at the end of the 18th century and the memoirs of craftsmen, the décor has been faithfully restored – but with up to 18 layers of paint in some places, it was no easy task! Hidden behind the stainless-steel walls of a kitchen, the Cabinet doré was among the surprises awaiting restorers. One the hôtel’s most exceptional rooms, it now basks in its former glory, with two fireplaces, a crimson damask décor, and two exceptional pieces of furniture by Jean-Henri Riesener – a mechanical table, known as the Table des muses, and a cylinder desk. The Cabinet des glaces is also a feast for the eyes: painted with naked women, it reveals the licentious tastes of one of the intendants. The prudish wife of his successor had their bodies veiled and painted with the faces of chubby little cherubs!

From the fall, the tour will include the exhibition galleries of the Al Thani Collection, which contains works of art dating from antiquity to the present day. Several eateries are accessible from the Cour d’honneur, including the Lapérouse café, overlooking the square, and the restaurant with its menu concocted by the chef Jean-François Piège. A perfect way to end a visit to this luxuriously furnished mansion. 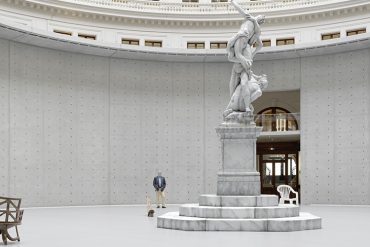 Pinault collection, Emotions in the round

Passionate collector François Pinault has had fun creating this display with...