30 Sep 2015
Five years in the making, the Philharmonie de Paris, a sumptuous new symphony concert hall, which will also present jazz, pop and world music, recently added its name to the list of the capital’s most prestigious cultural venues.

The decision to build the Philharmonie was taken in 2006, and the international competition attracted submissions from one hundred or so architecture firms. Out of six finalists, one project – Jean Nouvel’s – made the grade. According to Laurent Bayle, the Philharmonie’s general director, two factors weighted particularly heavily in its favor: “The building was integrated into La Villette park, walkers wouldn’t be inconvenienced by it, and you could stroll right up to the roof.”

The building has two aspects. From the outside, the concert hall looks like a mineral mass, an artificial hill, ridged in a seemingly disorderly fashion, as if shaken by an earthquake. Most of the façade, the roof, and the slopes that twist towards the hall and belvedere are covered by striking aluminum cladding and a stylized bird motif, repeated endlessly in different shapes and shades of gray, symbolizing flights of music. The section of the façade surrounding the concert hall, on the other hand, is covered with steel plates, and the large picture windows help give the building a more classic feel. The roof is dominated by a screen wall onto which the concert program will be projected. Visible from Paris and its suburbs, it is intended to be “a hand extended to people living beyond the ring road,” explains Laurent Bayle.The interior is similar to most modern cultural institutions of note. The concert hall – partly the work of acoustical engineers Harold Marshall and Yasuhisa Toyota and the architect Brigitte Métra – has impressive, cathedral-like dimensions. It has 2,400 seats, some of which can be removed to accommodate 3,600 spectators. Because too much reverberation leads to a loss of clarity, the challenge was to combine the two. The audience has therefore been placed close to the artists – who perform on a central scalable stage – to immerse them in the music. To stop any noise filtering in from outside, the concert hall has been suspended in a “box inside a box”. A perfect balance between utility and design, the balconies seem to float in the air and the ceiling reflectors hover like clouds.

Around and under the main concert hall are the dressing rooms and rehearsal rooms (the biggest of which can accommodate a large orchestra with an audience), ten studios, and a series of rooms lined with instruments that everyone can play. The building also has a 800 sq.m. exhibition space (the first exhibition was devoted to David Bowie, until August 21 The Velvet Underground exhibition shares the legacy of the illustrious but short-lived band – 1965-1970 – that marked a major turning point in the history of music), plus a conference room, bookstore and boutique, and two restaurants. On the seventh floor, Le Balcon, a “casual, relaxed contemporary” bistro will serve tapas, salads and seasonal dishes, initially only in the evening. Its panoramic views over the park and its terrace tables are sure to be a success. On the ground floor, which also gives onto the park, the Atelier d’Éric Kayser bakery and café will serve its usual pastries, light meals, sandwiches and salads, to eat in or take out. A lobby and six bars – including a Deutz champagne bar – just outside the main concert hall will be open before concerts and during the interval.To work the Philharmonie into the urban fabric, the restaurants and walkways are open to all – whether they are planning to take part in the program of activities or not – meaning that anyone can climb this architectural hill, via the main stairway or a series of gentle slopes, to a belvedere on the roof, but all of the indoor and outdoor areas are also accessible by lift. The view includes the Cité de la Musique designed by Christian de Portzamparc. Opened in 1995, the Cité, surrounded by a new set of buildings, is now called Philharmonie 2. 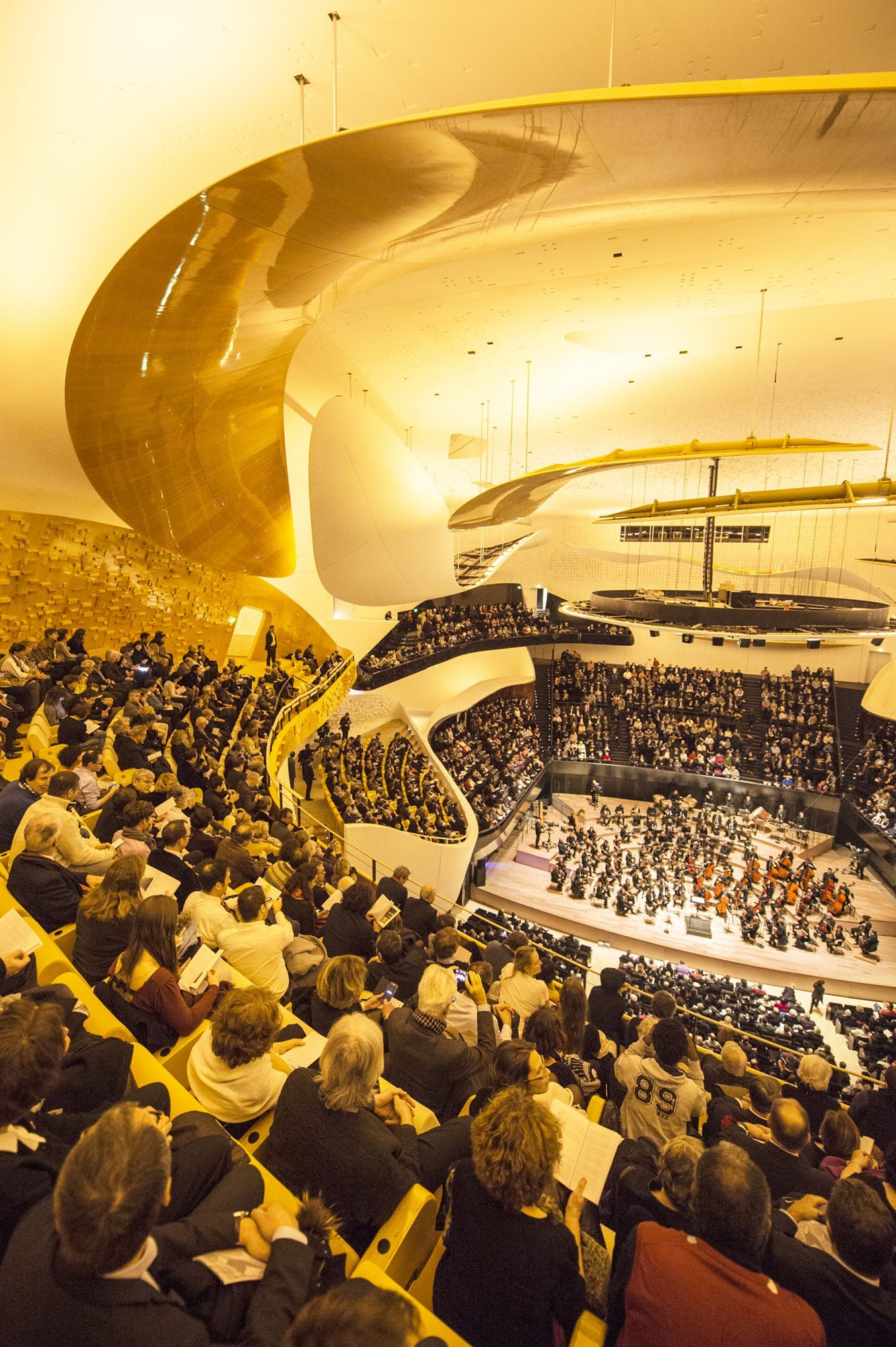 A living space opened for everyone

As with the Cité de la musique, jazz, world music and contemporary sounds, dance and other mixed media performances, such as movie concerts, will also be on offer, although classical music is set to dominate the program. Laurent Bayle sees the Philharmonie as “a living space” like the Centre Pompidou, which offers much more than permanent exhibitions to pull in the crowds. According to Bayle, the risk for classical concert halls is that “they don’t reflect the way the public use them today, particularly young people.” So weekday evening concerts, exhibitions, workshops, and more themed weekend events and activities have been planned to attract families and people interested in music, “from music devotees to people who might normally feel intimidated by places like this,” adds Bayle.